You’ve heard it before. You’ll hear it again during Spring Break 2015. And you’ll keep hearing it for many more years to come. Simply said, Panama City Beach, Florida is the ‘Spring Break Capital of the World’. There’s no denying it. Period.
So why does the famous North-West Florida beach destination have this moniker, and when exactly was it officially crowned as the college party capital?
The Spring Break migration to Panama City Beach (or PCB as it is commonly referred as) started more than two decades ago, spreading from Daytona Beach on the Atlantic Coast, and other parts of Florida. The annual college party, recognized as the biggest student event of the year, kept growing, reaching peak numbers (as recently as a few years ago) when over half a million students flocked the beaches and crowded the Front Beach Road and Thomas Drive strips of hotels, bars and restaurants. 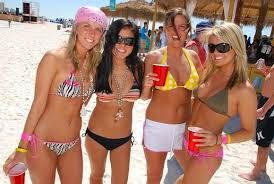 MTV came to town in 2006 and broadcast its huge annual Spring Break series of concerts, contests and parties from massive stages set up on the beach. Arguably, the arrival of MTV ushered in a new era for the one-time small beach town starving for tourist attention.
Going back to the early 1990s, Panama City Beach was one of the very few communities that actually welcomed Spring Break to its beaches. Many destinations were beginning to frown upon the prospect of inviting the college crowd to their hotels and restaurants for fear that the potential rowdy and raucous behavior would scare away other tourists. 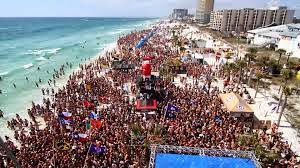 Students from all over the East Coast and Mid-West came to ‘Spring Break on Panama City Beach’ because it was affordable, easy to get to, and contained over 27 miles of white sandy beaches for students to spread out across and enjoy. And the city loved the business. Spring Break provided the necessary kick-start to a prosperous summer tourism season. And what a kick-start it was. What began as 25,000 attendees quickly became 250,000 within a short 10 year span – and eventually doubling to half a million soon after. Word of mouth about this small town was indeed spreading like wildfire.
Panama City Beach, Florida was officially on the map during Spring Break 2006, positioned in front of the world as the one place to be in March. How could anyone not notice the beaming images of tanned, swimsuit clad, and energetically happy students? They were right there, front and center, for the whole planet to see.
The declaration that Panama City Beach was the Spring Break Capital was only further solidified when MTV came back in 2008 and then again in 2009. Students from all over the world, including England, Germany, Brazil, Australia and Canada, have bought into the hype and have traveled to PCB, just to get a piece of the Spring Break experience.
Each year approximately two million students decide to hit the beach during their break week in late February and March. There are, of course, many places to choose from that are considered to be Spring Break destinations. But no other place in the world can even come close to recording the same amount of students that decide to make PCB their travel spot. In fact, more students come to PCB each year than all other Spring Break destinations combined!
Businesses and huge corporations have also taken notice. Companies like Coca-Cola, Pepsi, Red Bull, Trojan, Maxim, Sony and many more have all come to town in March to set up promotions on the beach in the hopes of drawing student attention. Spring Break has become a massive business and it would be untruthful to say that Panama City Beach’s captive audience hasn’t sparked a youth marketing revolution – corporate branding and how companies decide to market their products to students around the world has been greatly influenced by the sensationalism of Spring Break. 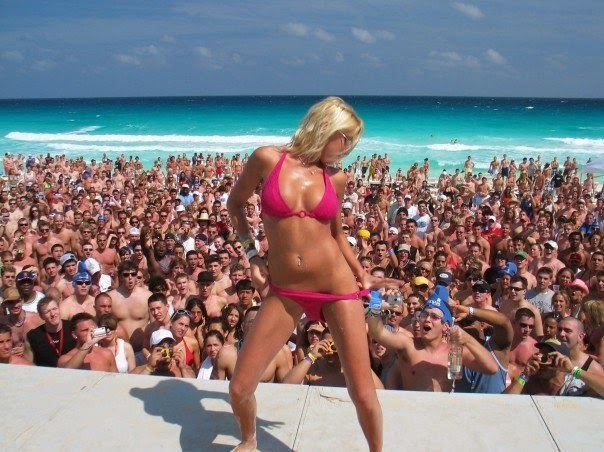 With social media now sinking its hooks into everyone, the dynamics have once again changed. Whereas MTV was the necessary tool seven years ago to help with PCB’s global blast off, these days, all that’s necessary is a smartphone. Thanks to Facebook, Twitter, Instagram, Pinterest, and other social platforms, the business and allure of Spring Break in Panama City Beach has been propelled to even newer heights. Students are coming back for a second, third, fourth and even fifth time, totally ignoring what any other option would be.
It’s hard not to notice what students are talking about. Just go on Twitter and hashtag PCB or Spring Break and you’ll see that many are already talking about their plans for March. Spring Break has become part of the student social fabric. It’s exciting to even just mutter the words “Spring Break” to yourself!
Which brings us to a sobering moment: what would the institution of Spring Break be like today if Panama City Beach hadn’t welcomed America’s youth with open arms over two decades ago?
If the city and its marketers hadn’t used their vision to change how students, and the world alike, view and talk about Spring Break, there’s no denying that things would be very different. Perhaps students would have found some place else. But we’d like to think that one thing is for certain; no other place would have had the lasting power nor would have been able to sustain the constant hype like our very own ‘Spring Break Capital of the World’.

For all your Spring Break 2015 needs and information, including Where to Stay and Where to Party, please continue to visit www.pcbeachspringbreak.com – the official website for Spring Break in Panama CityBeach.
Posted by Larry Holmes at 10:03 AM No comments:

BE SURE TO MARK THIS DATE ON YOUR CALENDAR! 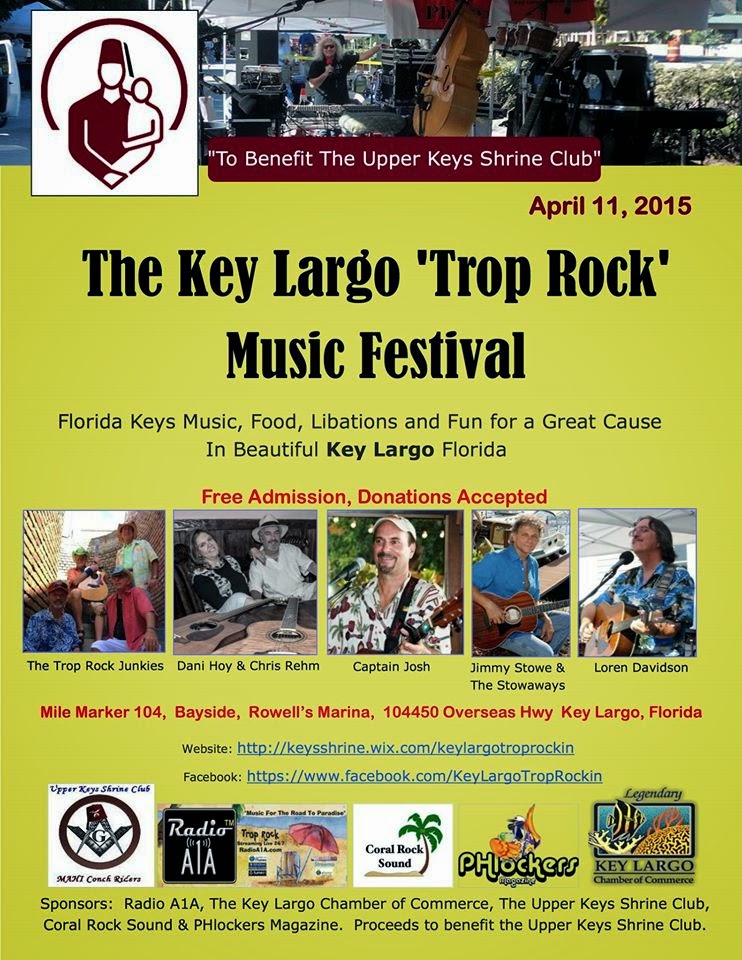 Posted by Larry Holmes at 2:29 PM No comments: 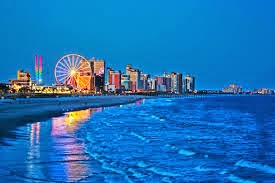 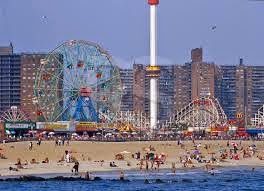 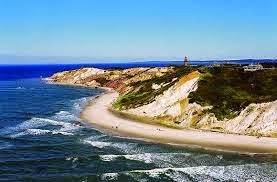 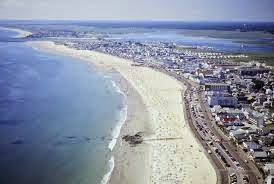 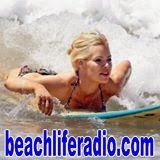 The Beach Life Radio Network supports local music from coast to coast. We have an eclectic mix of musicians from the islands, beaches, bars and harbor towns around the world. BLR is seeking new music and shows for airplay on the station. Please submit your song, CD or radio show for consideration to talent@beachliferadio.com The Beach Life Radio Newtwork consists of beachliferadio.com nantucketislandradio.com and starboundradio.com For advertsing and sponsorship information email larry@beachliferadio.com
Beach Life Radio plays music 24/7. Tune in daily and listen to a variety of shows that showcase artists, review music, perform comedy, visit local bars, clubs, events and much more! Join us for "Party In Paradise with Todd Sparks and Rock n Roll Cheri", "Island Time Radio Show with Dennis King", and the "GFsix Radio Show with Wes Dog"
We love the beach life and music is our passion. Beaches & good music inspires us...
Our mission is to support and promote local music and the arts in and around our beach towns. We invite you to join us on our journey as we sail the seven seas searching for new talent. All roads lead to a beach... Visit our new site - beachlifenews.com 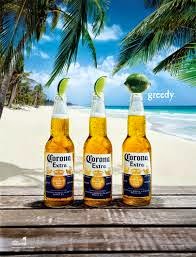 Posted by Larry Holmes at 4:15 PM No comments: 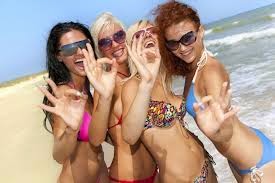 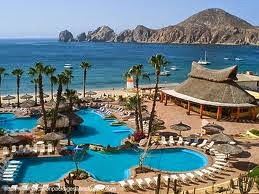 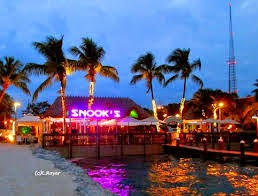 Located at MM 100 Bayside in Key Largo FL. is Snook's Bayside Restaurant and Grand Tiki Bar. Snook's is a legendary landmark and one of the most beautiful restaurants in the Keys! It is accessible by car and boat and it has the most extraordinary sunsets on the bay... If you are looking for a romantic evening, a delicious meal, or just a few cocktails be sure to visit Snook's Bayside. Visit their website at snooks.com 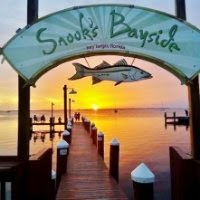 Posted by Larry Holmes at 3:38 PM No comments:

Spring Break In The Florida Keys

Spring Break is here and if you are looking for "Beaches, Bars and Bikinis" the famous Post Card Inn at Holiday Isle Resort in Islamorada Florida is the place to go. Holiday Isle has it all! The world famous Tiki Bar, a beautiful beach, two pools and five bars!!! Not to mention the only bikini contest in the Upper Keys! Check out this Zac Brown band video that was filmed on location at Holiday Isle. And don't forget to try the Rum Runner that was invented at Holiday Isle by Tiki John.... 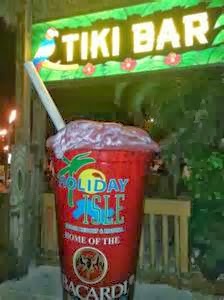 Posted by Larry Holmes at 4:17 AM No comments: